Now that your cast iron pans are seasoned, it’s time to cook!

Although this is considered an “old-fashioned” was of cooking, I have to say, it is MUCH easier than I expected!

My first foray into cast iron cooking was on an open fire when we went camping as a family.

We built a healthy fire under a cooking grate. When cooking with cast iron outside it is very useful to have a grate or a trip-pod to cook with. Then I oiled the pan with olive oil.

Allowing the pan to heat up for about 15 minutes, I then placed the dough balls in it.  I was making biscuits.

At this point, with this type of cast iron which is called a dutch oven, I placed the lid on and piled hot coals on top.  This creates an actual oven-type environment for the biscuits to cook.

Don’t be too impatient and keep looking like I did.  It’s a low and slow type cooking style.

After about 35 minutes, the biscuits were done.  They didn’t burn, they didn’t stick to the oven – it was amazing!  And with just water and a little elbow grease (no soap), the pot was clean!

Here is my son enjoying a biscuit with cheese! 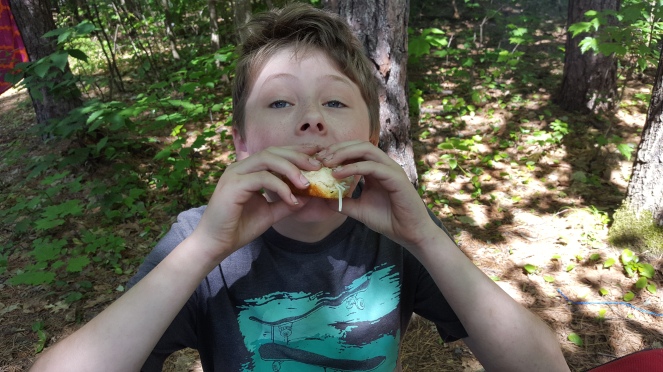 Welcome to All the Good Things!

I am a freelance writer and photographer. But, more importantly, I am a homeschooling mom to three boys.

Let's navigate through parenting, homeschooling and gardening together...with a little sense of humor and a big dose of reality.